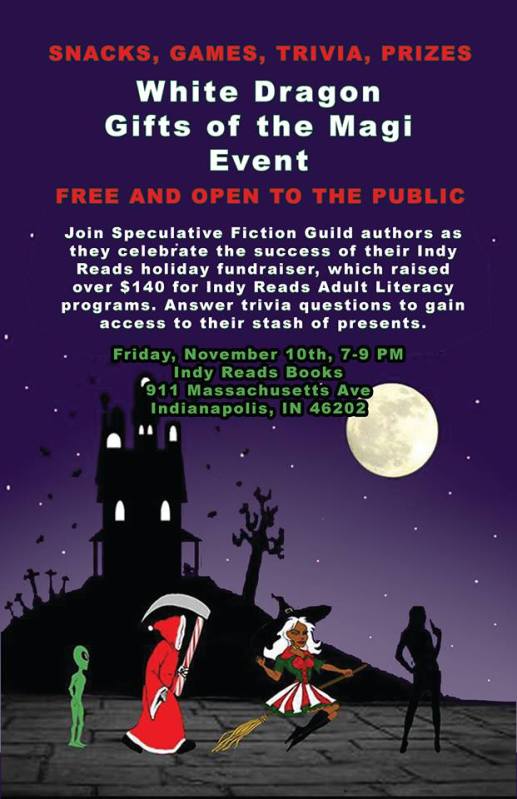 The book raised $40 for IRB in 2014. Over the next three years, the anthology has raised an additional $100, which the SFG will present at the White Dragon Gifts of the Magi Event on Friday, November 11, at 7 PM at Indy Reads Books.

Click here to see the details about the anthology and to order your copy.

It’s heeeere… Alien Beer and Other Stories, a collection of 23 of E. Chris Garrison’s short stories and flash fiction! Some have appeared in other publications, many have been a part of the Iron Writer Challenge, and still others, she’s showing to this world for the first time.

Get the paperback on Amazon:

Gifts of the Magi Anthology Back in Season

The holidays have returned, so it’s time to remind you about the anthology that never went away!

Last year, SFG Publishing, the publishing label of the Indianapolis based Speculative Fiction Guild, released its first-ever holiday anthology with all proceeds benefiting Indy Reads, a not-for-profit organization that provides tutoring to illiterate and semi-literate adults.

In most cases, these stories are set within an author’s series universe. Readers of fan favorite series can return to familiar settings and characters, such as the Coyote Series by Chantal Noordeloos and the Clockwork Republics tales by Katina French. NYT and USA Today Bestseller Debra Holland also revisited the fantasy world of her Gods’ Dream Trilogy, and the anthology editors have each contributed a new story from their ongoing series.
—-

Stories for Christmas– authors for the New Year!

Find within this magical tome 14 NEW original holiday-themed stories of fantasy, horror and science fiction by a talented group of authors–plus one holiday essay. The tales from our Magi vary from the light and satirical to the dark and serious, and we’ve shuffled the deck to keep you guessing.

Indy Reads is a not-fo

r-profit organization that relies on volunteers to provide basic literacy tutoring to illiterate and semi-literate adults. . “Our mission is to promote and improve the literacy of adults and families in Central Indiana. We believe that everyone should have an opportunity to learn to read, and our goal is to make Indianapolis 100% literate. Our programs include one-on-one tutoring, small group sessions, English as a Second Language instruction, and ‘Literacy Labs’ at neighborhood centers.” Indy Reads operates a bookstore in downtown Indianapolis. Learn more at www.Indyreadsbooks.org .

SFG at the Irvington Halloween Festival

The Speculative Fiction Guild is excited to announce its participation in a new event for us.

The Historic Irvington Halloween Festival is a week-long festival that concludes with a street fair on Sat. Oct 31. Click here to go to their Facebook event page.

Local vendors will be on site from 10 am-5 pm on Halloween;

you’ll find all sorts of local vendors, including our SFG booth and a separate booth for member publisher Das Krakenhaus Press. You can view the array of titles from Das Krakenhous here.

At the SFG booth, five of our local authors will be selling and signing their books, with a call-out on our ghost story, paranormal, and urban fantasy titles, including:

stories guaranteed to pique the interest of readers who like all things that go bump in the night. Each author will be on-hand to sign and personalize every book, pose for pictures, and share their favorite Halloween stories.

Our booth is in the Back Acre Beer Garden on the corner of Bona Ave & Audubon Rd. Go to the event website to read all about the exciting events happening throughout the day. We look forward to seeing you there!

GIFTS OF THE MAGI Countdown to Christmas Ebook sale!

SFG Publishing is making GIFTS OF THE MAGI the easy choice in ebook downloads with a Countdown to Christmas Sale starting Thursday, Dec. 18 (That’s tomorrow as we write this).

How’s it work? Simple. You can order our fabulous GIFTS OF THE MAGI holiday short story collection in Kindle ebook from this link as you would normally do, but at a special price as we countdown to Christmas and “count up” to full price.

Please confirm you see the special price listed before you follow through and finalize your order.

Come Christmas, the ebook will still be available at its normal price of $3.99, and, y’know, if you just have to buy stuff at full price, that’s okay, too. We’re not judging.

So get yours, buy some for your friends, and help spread the word as we count down to Christmas As always, all proceeds go to Indy Reads Books, a fundraising arm of IndyReads, a NFP organization that provides literacy tutoring for adults in the Indianapolis area.

If you need to review complete details about the collection, click here!

The window to have online gifts delivered in time for Christmas is closing fast. Fortunately, we’ve got the fantasy /horror /sci-fi loving readers on your list taken care of with GIFTS OF THE MAGI: A SPECULATIVE HOLIDAY COLLECTION.

When you order the paperback thru Createspace and use the coupon code at checkout, you get 15$% OFF, now thru Friday! As always, all proceeds benefit Indy Reads Books.

Copy the code above and order from this link. (Don’t forget to paste the code in the “Promotion Code” field before your finalize your order : https://www.createspace.com/5059889

Thanks for your support. The authors and editors of GIFTS OF THE MAGI wish you a very Merry Christmas.

Eight authors are scheduled to appear at Indy Reads Books Thursday night to read from, and sign copies of, Gifts of the Magi. Contributing authors scheduled to appear are: John F. Allen, Matthew Barron, J.P. Bastin, Nicole Cushing, Katina French, E. Chris Garrison, David Jobe, and R.J. Sullivan. Authors will read a short excerpt from their story, and will sign copies for shoppers. The signing offers a unique opportunity for shoppers to purchase the volume and come away with the majority of the stories in the collection signed by the authors. (Authors will be happy to sign copies previously purchased.)

100% of all proceeds from Gifts of the Magi will benefit Indy Reads Books, a source of revenue for the not-for-profit organization Indy Reads, whose mission is to improve the literacy skills of adults in central Indiana who currently read at or below the sixth grade level. Since its release last month, Gifts of the Magi has raised close to $100 for the organization.

RJ Sullivan Reads from Gifts of the Magi

Another reading from GIFTS OF THE MAGI: A SPECULATIVE HOLIDAY COLLECTION, this one by R.J. Sullivan, reading from his entry “Blue Christmas.”

Chris Reads From “Christmas Special” from Gifts of the Magi

“Christmas Special” is a modern fairy tale I wrote that bridges my Road Ghosts books with the upcoming Tipsy Fairy Tales. It stars Enid, who you may have met if you read “Spectral Delivery” early this year, and she’s joined by Gonzo and the Transit King, a jovial gnomish “fairy Godfather” who travels the straight tracks on buses and trades in favors owed.

I wrote the story as a part of the Speculative Fiction Guild’s charity-benefiting anthology, “Gifts of the Magi: A Speculative Holiday Collection”. All proceeds benefit Indy Reads Books, an Indianapolis area literacy charity.

We’ve been very excited about the buzz our first anthology release has received, but what’s a book these days without a spiffy book trailer to help give it a push?

Yep, that’s what we said, too, so co-editor R.J. Sullivan learned how to use a free slideshow program in a hurry, and, several handfuls of hair later, presented us with the following for your viewing pleasure.

Paper copies of Gifts of the Magi: A Speculative Fiction Collection were dropped

off at Indy Reads Books, so you can pick up your copy there or order yours online. A great Christmas gift! Available in Kindle ebook, too. All proceeds benefit Indy Reads’ adult literacy programs. Click here to see the dedicated page.